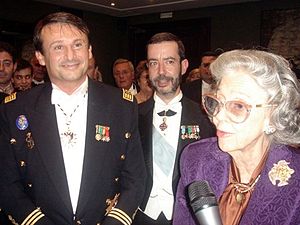 When I think of Belgium, I think of Tintin, the EU, and lots of arguing about who should speak what language.

The Belgian royals are a lovely family, but they are not usually on my radar. They are pretty quiet – at least here in America – compared to their counterparts.

In Britain, we’ve seen Prince William sending the media into a frenzy over whom he will marry; in Holland, the traditional ‘Queen’s Day’ ended in drama when a crazed man drove his car through the crowds; and in Sweden, the Crown Princess is about to set a record when she marries next year – the only Queen regnant to take a commoner husband and grant him the HRH title.

Lately, however, I’ve seen that the Belgian royals are full of character and crazy events. We don’t always get to see the funny, dramatic, or casual side to the lives of Royalty until that one crowning moment.

That moment came when Belgium’s dowager Queen Fabiola was threatened with death by an anonymous nut. They claimed that they would shoot to kill during Belgium’s National Day celebrations, the fatal blow to be delivered with a crossbow.

I don’t know about you, but I would take that threat seriously. I’d consider attending said celebration with a bullet-proof vest and some chain mail. Under armor. Or maybe I wouldn’t turn up at all.

This feisty Queen Mum of België decided to dress in normal attire, with the typical royal chapeau and… an apple.

The surrounding members of her family were seen chuckling as Fabiola brandished the apple. She waved it to and fro, as if to say, Where are you, William Tell? You might, at this juncture, expect a white-gloved thumb to the nose and a quiet “Neener neener”.

Queen Fabiola is full of surprises, and brazenly brave to boot. My hat is definitely off to her!

FAQ of the moment

What are the small jeweled portraits pinned to Her Majesty’s sash?

These are royal family orders. Female members of the family receive them from the monarch. The Queen wears the orders of her father and grandfather, while the rest of the royal family wears her order. The Queen’s order is her likeness, surrounded by diamonds and nestled on a yellow ribbon.

Welcome to The Royal Representative! I produce this blog to give people a new perspective on royalty. History instead of celebrity!
{ read more }
SEARCH THE ROYAL REP

Princess Rym al-Ali is the Algerian wife of Prince

While checking out wedding gowns to draw, I came a

I'm loving summer. Not going to lie, I'm rather dr

Prince Joachim underwent emergency surgery for a b

Congratulations Bea and Edo! AND SHE'S WEARING THE

Lovely. Congratulations to them!